Check out 10 of the world's most magnificent and ultra-luxury set of wheels, built to break speed records and inspire acute envy. 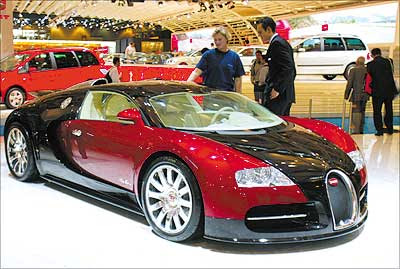 The Bugatti Veyron 16.4 from Germany is the world's fastest, most expensive, and most powerful car in the world. It can touch speeds of over 407.5 kmph and can go from 0 to 62 mph in 2.5 seconds.
The supercar costs about $1.4 million (Rs 6.3 crore).
Bugatti Veyron car is made by Volkswagen's 100% arm Bugatti Automobiles. The car has been named after Formula 1 racing driver Pierre Veyron, who won the Le Mans race in 1939 while driving for Bugatti.
The car has a W16 engine, which is the equivalent of two narrow-angle V8 engines fused in a 'V' formation. Each of the car's cylinders has 4 valves making it a total of 64 valves. The engine is fed by four turbochargers.
The car also has a fantastic array of electronic equipment. The Veyron can be driven by full automatic transmission. The car's wheelbase is 2710 mm and its overall length is 4462 mm. It is 1998 mm wide and 1206 mm in height. The car's weight is about 1,890 kg.
People admire the Bugatti Veyron 16.4 displayed at the Paris Auto Show.
Photograph: Jacques Demarthon/AFP/Getty Images 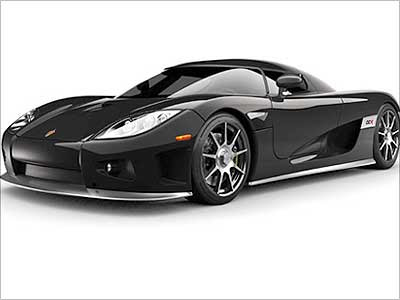 The Koenigsegg CCX is a highly expensive and extremely fast car from Sweden. It can go from 0 to 60 mph in 3.2 seconds.
The supercar costs about $722,534 (Rs 3.25 crore).
The Koenigsegg CCX -- CCX is short for Competition Coupe X -- is powered by a Koenigsegg designed and assembled, all aluminium, 4700 cm3 DOHC 32-valve V8 engine. The engine produces 900 hp on biofuel.
This beauty is a two-door, two seater dream that comes with a removable hardtop that can be stowed under the front hood lid. The car's body is made of carbon fibre or kevlar.
The car's interior too is mindboggling and the machine is packed with some great gadgets.
Photograph: Courtesy, Koenigsegg 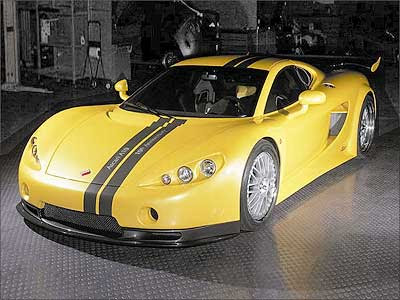 The Ascari A10 is a super automobile developed by the British company Ascari Cars. The car can go from 0 to 60 miles per hour in 2.8 seconds.
This super car costs about $665,000 (Rs 3 crore).
The A10 features a 5.0 L V8 engine producing 600 hp. The engine delivers power via a six-speed manual transmission. The car has a carbon fibre bodywork, which makes it quite light and terrifyingly fast. The estimated weight of the car is 1,280 kg.
The company says that the A10 can achieve a top speed of a mindboggling 350 kmph. 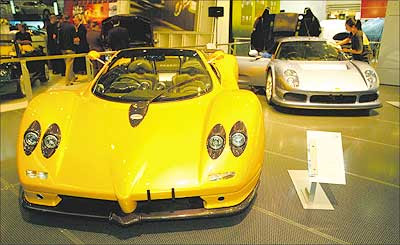 The Pagani Zonda Roadster F is a supercar produced by Italian car manufacturer Pagani.
This Italian beauty costs about $610,000 (Rs 2.75 crore) and can go from 0 to 60 miles per hour in 3.5 seconds.
The Zonda Roadster F comes with a removable carbon fibre roof and canvas side curtains weighing just 5 kg. The number of Zonda Roadster F produced by Pagani will be limited at 25.
The Roadster F uses racecar philosophy, materials and construction techniques. It has a strengthened firewall structure of the chassis. The windscreen is also strengthened for safety reasons. These features make it quite light at 1,230 kg. 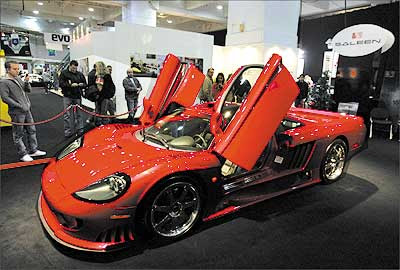 The Saleen S7 is America's reigning supercar, jointly designed by RML and Saleen Inc.
This spectacular machine costs about $580,000 (Rs 2.61 crire)and can go from 0 to 60 mph in 2.8 seconds.
It is built at Saleen's headquarters in Irvine, California, USA. The super car has center-locking wheel nuts with automatic safety locks; it has integrated roll protection aluminum honeycomb impact absorbing panels; its engine is equipped with two turbochargers and it comes with 3-point seat belts with automatic seat belt pre-tensioners.
It has a carbon fibre body, integrated rear crumple zones and a center-position fuel tank. 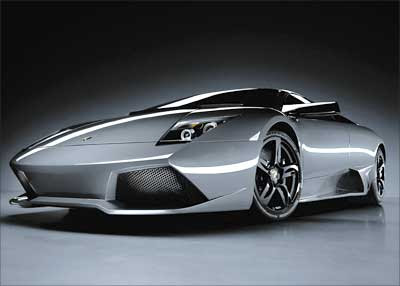 The Lamborghini Murcielago LP640 is a supercar made by Italy's Automobili Lamborghini S.p.A. It is perhaps the world's most recognised and desired car.
This extraordinary supercar can set your bank balance back by about $319,000 (Rs 1.43 crore). It can go from 0 to 62 mph in 3.4 seconds flat.
The Murcielago LP640 features an engine that is mounted 'backwards,' with the transmission at the very back of the car. The 'LP' in its name stands for Longitudinale Posteriore which refers to the longitudally-mounted, 6.5 L V12 engine, capable of producing up to 640 bhp at 8000 rpm.
This super car is made up of steel and carbon fibre. It also has an all-wheel drive system and scissor-opening doors.
The car comes with ceramic brakes for swifter braking and a glass engine cover (transparent) which shows off the LP640's 6.5 L V12 engine. The electronic gadgets that go with the car only make it all the more alluring. 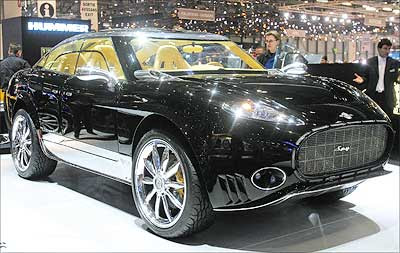 This Dutch supercar costs about $287,500 (Rs 1.3 crore) and can go from 0 to 62 miles per hour in 5 seconds.
The D12 is described as a Super Sports Utility Vehicle. It is a four-seater, four-wheel-drive car that comes with a Volkswagen W12 engine and a six-speed transmission.
At 5 metres long, 2 meters wide and 1.68 meters tall, the car is huge, but its aluminum body keep its weight down to a relatively low 1,895 kg.
Despite its weight, the car's super engines can gun it to great speeds. True to its supercar status, the Spyker D12 sports some pretty extraordinary gadgets under its hood. 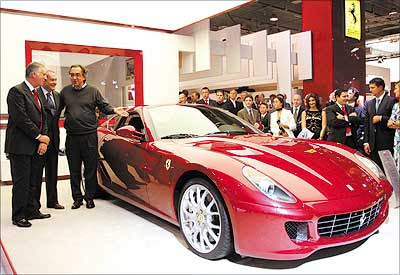 The Ferrari 599 GTB Fiorano is a magnificent 2-seat machine styled by Pininfarina along with Ferrari's in-house design guru Frank Stephenson.
This Italian supercar is Ferrari's most powerful V-12 production that costs about $255,000 (Rs 1.15 crore) and can go from 0 to 62 mph in 3.7 seconds.
The car's weight is about 2300 kg. It's body is made of aluminium. The car's F133F 6.0 L, V12 engine produces 611 hp making it the most-powerful Ferrari road car.
This head-turner's insides too are a lot to rave about and it too comes packed with some fantastic electronic wizardry. 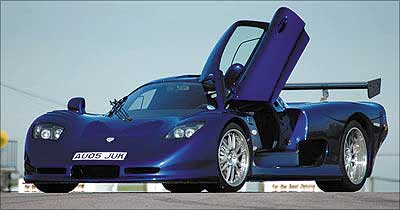 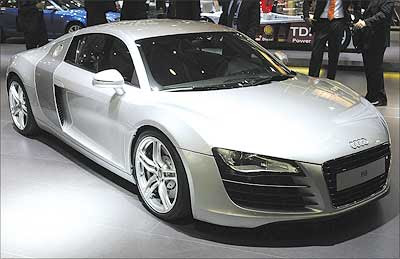 The Audi R8 is a sports car from the German automaker Audi.
The R8 supercar from Audi costs about $130,000 (Rs 60 lakh) and can go 0 to 62 mph in 4.6 seconds.
The Audi R8 will come with a 4.2 L V8 that can churn out 420 hp. The R8 weighs 1,560 kg.
The Audi R8 is very compact. The cabin of the Audi R8 is pushed far forward, behind which is the V8 FSI engine. The chassis has aluminum double wishbones at the front and rear. The Audi R8 is fitted with 6-arm 18-inch wheels.
The car, like all supercars, comes packed with many more mouth-watering and high-tech features. 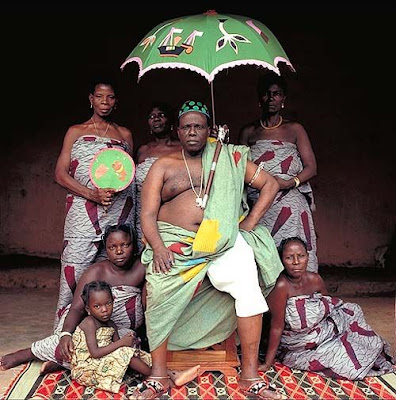